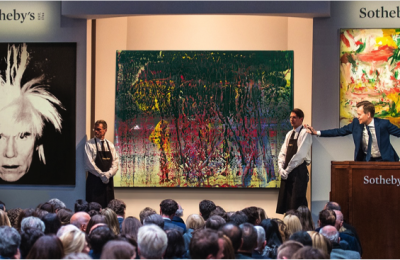 The Corfield Morris Guide: How to buy art at auction

This is the first of our definitive Guides on the key topics to help navigate you through the art world.

We have all seen footage at some time or other of an art auction taking place. There’s a person at the front (‘the auctioneer’) shouting out numbers from a podium (also called a rostrum) while an audience waves its paddles. The numbers go up, in regular increments, until the paddles stop waving, then there’s a moment of pause and the auctioneer calls ‘Fair warning’, (giving bidders one final chance) before Bang! the hammer comes down and the object in question is sold. This, they say, is the art market at its most transparent, the prices set in direct correlation to existing demand, with the ‘winning’ bidder being the person prepared to pay the most for the object.

Right? Well, not quite. There’s rather more that you should know before you think about buying art at auction, from condition reports to buyer’s premium to the murky world of third-party guarantors. Here we consider the questions you should be asking, and elucidate some of the potential traps of this most public-facing forum in the art market.

Auction houses publish glossy catalogues in advance of each of their sales (about a month before), with images, details and pricing estimates for each of the objects they will offer. These are expensive to produce and expensive to buy (a year’s subscription to Sotheby’s Classic Car catalogues, for example, will set you back $450), so it’s best to call up and say you are interested in bidding, because they will usually give you one for free. The houses also publish all information online, including pdf versions of their catalogues.

Estimates are designed to tempt bidders in while also ensuring they bid to levels that the seller is happy to sell at. Some objects are given very high estimates in an effort to bring their artist’s market to new levels (or to satisfy the demands of the seller), while others are given very low estimates in order to entice as many bidders in as possible. In either case the estimate should always be taken with a pinch of salt, and you or your advisor must do the necessary research to determine what price you think the object will make. Paying five times more than the estimate is not necessarily a rip-off, and securing the work for a lower figure is not necessarily a bargain.

In the days running up to a sale, auction houses will present the objects they are offering as an exhibition in their sale rooms. Interested buyers should absolutely try to view the object they are considering in person. The effects of texture, scale and light can never be translated with absolute accuracy in a photograph, and the auction houses are notorious for surreptitiously brightening the images they publish, distorting the true colours in the process. The experience of standing in front of an object will tell you infinitely more about how much you want it than the published image. Further, the auction house’s specialists are there on demand to answer questions and give you their spiels, and should be willing to take paintings off the walls and out of their frames for your close inspection.

Once you have honed in on an object you should learn as much about its history as you can. Who has owned this object before, and can ownership be traced right back to the day it was made? Has it ever been sold before at auction, how many times, how recently, and for how much? Has the object ever been restored, how, and to what extent? While these questions should be easy to answer for recent art it is absolutely critical for older objects, where issues of authenticity are paramount. Auction houses will produce their own ‘condition report’, an analysis of the object’s condition, but it is not uncommon for collectors to bring their own independent conservators in to examine the work.

You may notice a series of strange symbols printed alongside some auction lots. The meaning of these can usually be found in the index at the back of the catalogue, or on the auction house’s website, and their meanings can range from the particular export status of the object to the fact that the work is guaranteed to sell. It is always worth looking into these, as they may have important implications for your decision to bid on the work: for example, if the work is considered a national treasure, the UK government may implement a temporary export ban in an effort to keep the work in the country.

Once you have decided to bid on a work, you will need to register with the auction house. The house is required to do some due diligence, and may require a copy of your passport. If the object you are interested in is very high-value, they may require a financial deposit. Once this is complete they will assign you a paddle number, which you will need to place your bids.

Prospective buyers are able to attend the auction and bid on the works in person, though for evening sales at the major houses you will need to book a seat in advance. It is also possible to bid over the telephone, or online, both of which allow the bidder to maintain anonymity. It is also possible to leave an ‘absentee bid’, where you propose a maximum amount that you are willing to pay, and the auctioneer treats it as though you were a bidder in the room. Each of these has its own advantages, though your decision may come down to practicalities: if the auction is taking place in Japan, UK residents will most likely be asleep as it happens, so an absentee bid is best.

The seller of an object will usually propose a minimum figure they are willing to accept for the sale of the work. This is not generally revealed to participants, but is usually one increment below the low estimate.

Chandeliers (as in, pendant light fixtures) are some of the most active participants in the auction world. In their efforts to drum up excitement in the room, the auctioneer will accept bids out of thin air (i.e: from the chandelier) until the reserve price is met, in order to get the auction flowing.

One of the primary reasons for the success of auctions as a method for selling art has been the element of competition they induce in prospective buyers. Once you have gone through all the above, and are caught up in the heat of the moment, it is quite easy to get carried away and bid rather more than you had planned. There is even a tendency to refer to the buyer of the object as its ‘winner’, as though they have emerged victorious from a battle of wills (and wallets). It only takes two dedicated bidders for an object to vault far over its value. However, strong competition around a work is one of the best indicators of the strength of its market, and paying more than you had hoped to secure a broadly-coveted work can raise the value of the artist’s whole oeuvre. Sometimes, it is good to pay a lot!

Auction houses will sometimes tempt sellers to consign works with them rather than their competitors by offering them a ‘guarantee’. This is effectively a promise to buy the work for an agreed value (usually the reserve price), and acts in the manner of an irrevocable absentee bid. So even if no one else bids, the work is guaranteed to sell. Sometimes the house will offer guarantees out of its own pocket, and sometimes it will seek a guarantee from a third party. Guarantees are common only at the highest end of the auction market, and are indicated in the catalogue with the symbols listed underneath the lot. A third-party guarantor will receive in exchange for the assumed risk a share of any overage, often around 25%. So for example, Leonardo’s Salvator Mundi was guaranteed by a third party for $100 million in exchange for 25% of anything over that figure. The work’s hammer price was $370 million, so the guarantor received about $90million of the total sale proceeds that night, with no money down.

12. Buyer’s Premium and other additional costs

Buyer’s premium is the auction house’s fee charged on top of your winning bid. It is non-negotiable, and due on all auction lots. Different houses charge different percentage-scales, but in most instances buyer’s premium is charged at 25% of the hammer price plus VAT (so really more like 30%). This is why the buyer of Leonardo’s Salvator Mundi had in fact to pay $450 million, rather than the $370 million that was the hammer price. Further, if you are buying recent art in the UK, you will also have to pay Artist’s Resale Rights, a royalty of up to 4% that goes to the artist or their estate whenever their work is resold. ARR applies for the same length of time as copyright, life plus 70 years, and so is due even on works by Picasso, for example. It should also be noted that any shipping costs will also be charged to the buyer.

The art trade itself is the most active participant in most auctions, and dealers are likely to be bidding on works throughout any sale. Many have negotiated lines of credit with the house, and these and other financial arrangements can distort the true strength of the market. Dealers may be bidding on behalf of a client, maintaining the client’s anonymity while simultaneously raising their own profile by being seen to buy expensive works. In the Contemporary art world, it is common for dealers to ‘protect’ the markets of the artists they represent by bidding until the work sells for a figure in line with or even above their own prices. Similarly, if a dealer owns a large inventory of a particular artist’s work, it is common to bid works up to very high prices in an effort to raise the value of the artist’s whole market. Further, there is a fair amount of collusion at play between dealers: if two dealers want the same work they may agree in advance not to bid against each other, securing the piece for an artificially deflated price and then splitting the bill, ownership and later profits between them. These strategies are frowned upon but broadly put up with.

Works that fail to elicit any bids go unsold, and are described in the auction world as ‘Bought in’. The work may then be returned to the consignor, or stored by the auction house and re-offered at a later date (usually the following year). Works that are bought in are to some extent considered ‘burned’, and are usually re-offered with a lower estimate.

Payment in full is expected within 30 days of a sale at most, and houses are quick to pressure buyers for their payment immediately following an auction. While buyers in China have developed a reputation for being particularly slow to pay, and are becoming notorious for reneging on purchases at auction, a bid at auction is considered a legally-binding statement of intent to purchase, however much Champagne has been consumed!

With years of experience, unparalleled insider knowledge and an exhaustive book of contacts, Corfield Morris is at the cutting edge of today's art market. Whether you would like to identify and evaluate art, source standout pieces or discover must-have collectables, the team are at hand with first-class experience. For further information, please call +44 (0)207 038 3548 or email office@corfieldmorris.com