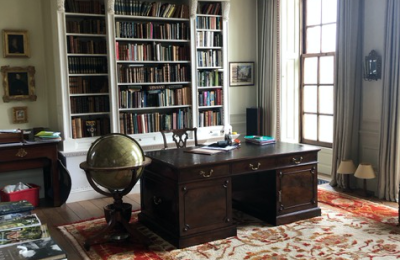 This is the story of an exceptional chair. Back in 2017 I spotted a fantastic oversized George II wing chair in a sale at Dreweatts – it was almost twice the size of a normal wing chair with a most unusual ‘barrel back’ shape. It also had four elegantly shaped cabriole legs, the rear legs being particularly well drawn. However, it was in a terribly dilapidated state – all the legs were set at different angles and it creaked alarmingly when sat on.

The pre-sale estimate was £2-3,000. I thought this was ridiculously low, so I advised my client – who had a desire to buy a number of wing chairs – that this piece was exceptional and that we should be prepared to pay up to £10,000 to secure it. In the end we bought it for a hammer price of £8,500.

The purchased chair then went to the restorer where it was stripped out, had all the joints recut and the geometry corrected, before making a trip to the upholsterer.

It is now installed in the hall of the new owner’s magnificent country house, where it not only looks beautiful but is also in keeping with the Ben Pentreath interior.

On another occasion, a client restoring a fabulous 18th century house was spending a lot of money on building works. As part of our efforts to keep expenditure to a minimum (while still populating the space with beautiful pieces) we bought him a perfectly nice desk. This was duly installed in the house – however, the house was 18th century in style and the Regency-era desk just didn’t look right in it.

Then, an outstanding Chippendale period desk came up for auction at Bonhams. It was part of the collection of the leading dealer and decorator Christopher Hodsoll. It also had provenance, connected with a great Irish house from the 18th century – a perfect match – so we decided to buy it and swap it with the Regency desk.

As is often the case when buying at auction, the desk required a certain amount of restoration, which was duly carried out. Finally, the desk was installed in the panelled library in front of a Chippendale chair and adjacent to an early 19th century globe. It was a wonderful combination – and a classic case of well-chosen pieces making a good interior design scheme great.

This remarkable library table was crafted for the historic West Acre High House, Norfolk. It can be seen here split into its two halves in the long gallery. However, it was initially designed as a centre table, as Cambridge’s Cheffins auction house, which handled the sale of the house contents, correctly showed in its catalogue – although note that the two halves did not fit together properly. The brass inlay was also missing in many places.

The library table split in two halves, as highlighted above

In the catalogue the table was described as being in “Country House Condition”, which is a euphemism for completely falling apart! Despite this, we could see the potential of the item and also had a client who needed a major statement piece for the centre of a huge room. The table was estimated at £10-20,000, though in the event we had to pay £50,000 despite the condition issues.

The restoration took about a year but the piece is now happily ensconced in its new home. As a side note, the last desk of this design was sold in the Hackwood House sale for £240,000, meaning our client got a wonderful buy here!

With years of experience, unparalleled insider knowledge and an exhaustive book of contacts, Corfield Morris is at the cutting edge of today's art and antiques market. Whether you would like to identify and evaluate art and/or antiques, source standout pieces or discover must-have collectables, the team are at hand with first-class experience. For further information, please call +44 (0)207 038 3548 or email office@corfieldmorris.com