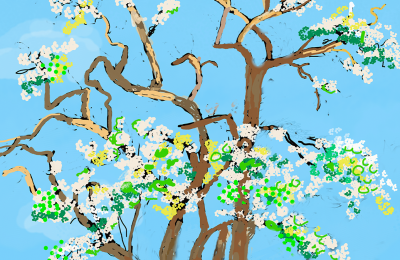 David Hockney: The Arrival of Spring at the Royal Academy

The ongoing relationship between the Royal Academy and David Hockney has been hugely beneficial to both the institution and the artist.

Hockney’s solo tour de force ‘The Bigger Picture’ at the RA in 2012 was a blockbuster of an exhibition. Primarily paintings of his beloved Yorkshire, the show also included the first outing of work created on an ipad. Fast-forward eight years and the world is in the grip of a pandemic. Hockney, proclaiming that ‘spring cannot be cancelled’, removed himself to Normandy to create work that marked the seasonal transition out of winter.

Installation view of 'David Hoickney: The Arrival of Spring, Normandy, 2020' at the Royal Academy of Arts, London

All 116 works shown here have been devised using an application customised for the artist; Hockney’s specifications were simple; he wanted to use digital technology to both draw and paint.

The narrative arc of the arrival of spring comes across loud and clear. The animations of a rain-drenched landscape and a tree bursting into blossom in the first room are good. Yet this was high-point of the show. From then on, a uniformity sets in.

Creating via an ipad has ironed-out much of the dynamism of Hockney's famous graphic sense. Not a single human figure appears in this exhibition, which exacerbates the almost theatrical nature of these images; despite celebrating the energy of spring, these vignettes of the Normandy countryside resemble stage sets. Painting is a messy business; perhaps the time has come for Hockney to set aside his ipad and get his hands dirty again.