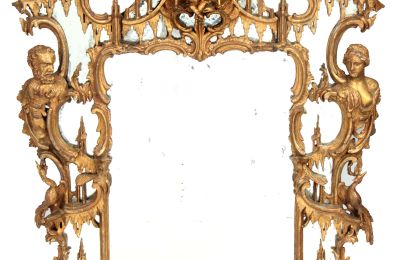 The backlog of consignments to auction houses caused by this wretched virus has meant that there have been far more lots going under the hammer in this traditionally quiet period than normal. Over the next ten days there are several pieces of 18th century furniture that we will be keeping our eyes on.

The first is a fabulously flamboyant carved giltwood overmantel mirror being offered at auction in the north of England. It’s 170cm high by 146cm wide and is estimated at £8,000-12,000. The current 19th century gilding hides a lot of the carved detail, but a good conservator could improve that greatly. A good opportunity to buy it well before it gets into the hands of a top dealer.

For original colour and surface you can’t go too far wrong with this early 18th century walnut chest-on-chest. With original handles and stunning timber it would be perfect for any bedroom. 184cm high by 105cm wide. Estimate £3,000-5,000.

Finally, there is a very elegant mahogany side table being offered in the south of England. It was almost certainly made by William Vile in about 1760 and closely relates to furniture by him in the Royal Collection in the King’s Bedroom at Windsor Castle. It measures 85cm high by 150cm wide and is estimated at £8,000-12,000. If it can be bought at anything like that the buyer should be very pleased!

Do get in touch if you would like further information on any of these pieces.