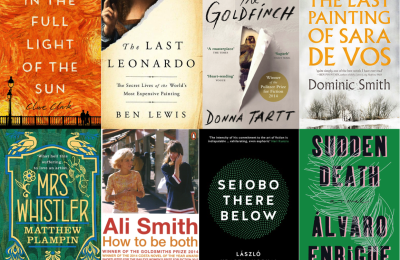 Essential summer reads for art lovers to take on holiday

Based in 1920s-30s Germany, this fascinating read is based on a true story known as the “Wacker affair”, in which German art dealer Otto Wacker was imprisoned for selling forged Van Gogh paintings – though their authenticity was hotly debated between a number of leading experts. Against this backdrop of scandal, money and increasingly turbulent political tension, headstrong art student Emmeline, enigmatic art dealer Rachmann and high-strung art dealer Julius becomes embroiled in the compelling case at the height of Weimar Berlin.

The Last Leonardo: The secret Lives of the World’s Most Expensive Painting – Ben Lewis (Ballantine Books, 2019)

In 2017, a small oil painting named the Salvator Mundi was sold at a public auction through Christie’s New York for a record-breaking $450m. The reason for this phenomenal price tag? It was an ardently sought-after work that had been considered something of a Holy Grail in art history for a number of centuries previously, painted by one Leonardo da Vinci. Bursting with colour and detail, Lewis’ fascinating narrative explores the provenance of this remarkable work of art, from da Vinci’s Renaissance studio and the court of King Charles I to Holland, Moscow, Louisiana and beyond, shining a light on the notoriously secretive nature of the art market along the way.

If you missed the Pulitzer-winning novel when it was first released now is the time to read it, as a much-hyped cinematic adaptation is due to land in cinemas next month. The story starts in New York, when 13-year-old Theo Decker survives a bombing at an art museum with tragic consequences – and makes a fateful acquisition of The Goldfinch, a Dutch Golden Age painting by Carel Fabritius. From there, Theo’s evocative, suspenseful journey takes him from the elegant houses of the beau monde to the seedy shadows of the criminal underworld, all the while anchored to this small yet immeasurably significant painting.

Smith’s sophisticated multi-stranded narrative plays with mirroring and parallels across different timelines. In 1600s Amsterdam, grief-stricken Sara de Vos, the first female master painter to be admitted to the prestigious Guild of St Luke, creates a dark landscape, while in 1950s Manhattan, Marty and Rachel de Groot host a dinner party in which a prized heirloom painting – de Vos’ last – is stolen and replaced with a fake. Finally, in Sydney, 2000, art historian Eleanor Shipley prepares to receive two identical paintings for a show – one, the original de Vos, and the other, the forgery, painted years before by Shipley herself. A compelling, suspenseful mystery.

Scottish author Ali Smith delivers another literary tour de force in this dizzyingly ambitious narrative. Published in 2014, it scooped such accolades as the Bailey’s Women’s Prize for Fiction and the Costa Novel of the Year Award, as well as being shortlisted for the Man Booker Prize. The story of a 21st century English teenager is interwoven with that of a 15th century Italian Renaissance artist – aka real-life fresco painter Francesco del Cossa – creating a complex yet beautifully written tale about time, love, identity and, above all, the enduring versatility of art.

Ward’s highly accomplished and critically acclaimed debut is split into seven chapters, each themed around a different artist and portrait – and each with a different girl reading. Young 14th century orphan Laura Agnelli prepares to pose for Simone Martini’s Annunciation, while deaf servant Esther is immortalised in Pieter Janssens Elinga’s Woman Reading, amidst his family’s suspicions of a scandal. Elsewhere, photography meets spiritualism in a Victorian séance, as a woman is surprised when she has her picture taken by a man in a bar in modern-day Shoreditch. Posing poignant questions around the role of women in art between the 1300s and the 20th century, this novel will be popular with those who enjoyed Tracy Chevalier’s Girl with a Pearl Earring.

Translated from Hungarian by Ottilie Mulzet, this powerful and exquisitely written novel was the winner of the 2015 Man Booker International Prize. Taking the form of 17 thematic stories, each portraying a different aspect of aesthetic experience, challenging the reader to rethink how beauty is defined and the ways in which an artist is connected to their creations. As the book’s title suggests (Seiobo is a Japanese goddess), a number of the narratives take place in Japan; a Noh actor rehearses for a performance; a Buddha statue is stolen; tourists disrupt ancient rituals at a sacred shrine. Artistic details are expertly threaded throughout, such as how pigment was prepared in Renaissance Italy.

In the 16th century, Italian artist Caravaggio and Spanish poet Francisco de Quevedo play a game of tennis with a ball made from the locks of Henry VIII’s executed second wife, Anne Boleyn. In the crowd, Mary Magdalene and Galileo watch expectantly. A postmodern epic, Enrigue’s delightfully surreal tale is packed with humour and rich historical details, taking the reader on a journey to Tudor England, Aztec Mexico and modern-day Manhattan. Creative parallels make for joyful play, such as, Caravaggio’s invention of chiaroscuro being echoed in a scene between conquistador Cortés and his translator-cum-romantic interest, La Malinche.

Released to coincide with the 400th anniversary of Hilliard’s death, this definitive biography – complete with rare archive material and full-colour imagery – charts the life of one of Britain’s foremost limners, from his early years in the West Country through to the heights of Renaissance society in the Elizabethan and Jacobean courts. Over the course of his career Hilliard captured the likeness of some of the most famous faces of his time, including kings and queens (Elizabeth I, James I) and eminent explorers (Sirs Francis Drake and Walter Raleigh); each exquisitely rendered in minute proportions. Revealing the man behind the miniatures, Goldring brings engaging anecdotes and little-known facts to life with aplomb.